I rarely do WiP Wednesday but have decided to start on the basis that it might focus my mind now that I'm going to have other commitments.

So keeping it real, I shall list only a couple of things.

First up are my blocks for the City Sampler. Since starting these last Friday I have made the first 15 blocks, which are all crosses. These blocks come together so easily and I am loving the combination of different Tula Pink lines and Oakshott. I have a way to catch up with the sewalong, which are at the mid fifties but who knows, I might do! 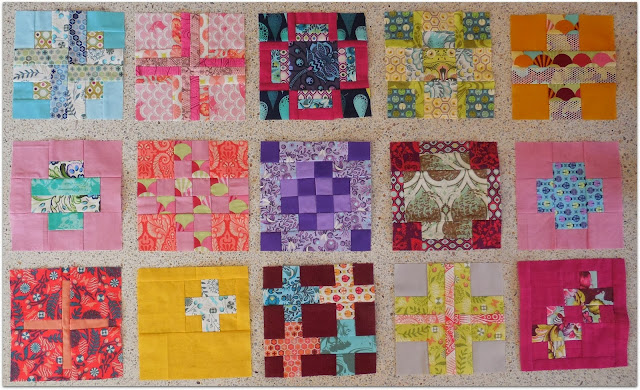 Second up is my gorgeous Stitch Tease quilt top, the theme for which was curves. 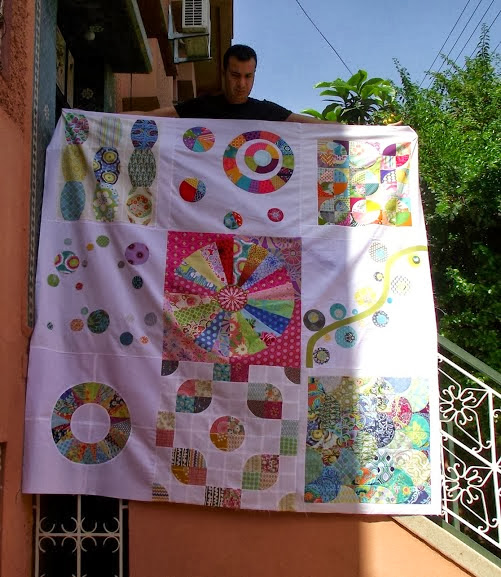 I have the batting and I'm going to do a pieced back...just need to decide on the fabrics. The only thing is that I left a lot of my basting pins at my mum's and so energy is required to face basting it with thread...and if I do that then I'm quite tempted to hand quilt it on my big hoop! Am I mad?

Linking up with Lee at Freshly Pieced.

It's October and round here that means one thing...cooler temperatures! Not that they are here yet...

September was a bit of a frustrating month for me sewingwise as I was behind from the start, lacked momentum for most of the month and really only found my rhythm in the last few days.

There were bee blocks to be made of course.

I had Jennifer's Stitch Tease bee blocks for August *blush* to make.  She asked for Arkansas Traveler blocks (far right) in hummingbird colours against a dark grey background. We used this super straightforward tutorial by Lee and the block came together with no difficulty.  The only problem was that the background was paper pieced and there was a lot of wastage so using the cutting instructions I got through a whole FQ for one block! The diamonds for the second block are made, so once new fabric supplies arrive, they will be off to Jennifer.

Hadley was Queen Bee in September's Stitch Tease and asked for 49 patch blocks using low volume in one block and aqua, deep pink, dark grey and low volume in the second block.  Now these was easy to put together but only once I had found the fabrics, which was challenging to say the least! She is going to have the most beautiful quilt.

A few months ago, Rhonda asked if I would join her Modern Stitching Bee and seeing who was in it I jumped at the chance. Leanne was first up for the new round and asked for square within a square blocks and QST blocks. She asked for fussy cuts in pinks, acid greens, aquas, zesty oranges and lemons and juicy purples. For the QST blocks, Leanne wanted prints which would read as horizontal lines - this challenged not only my fabric choices but my brain in correctly positioning the components of the block and let's just say there was seam ripping and then some! 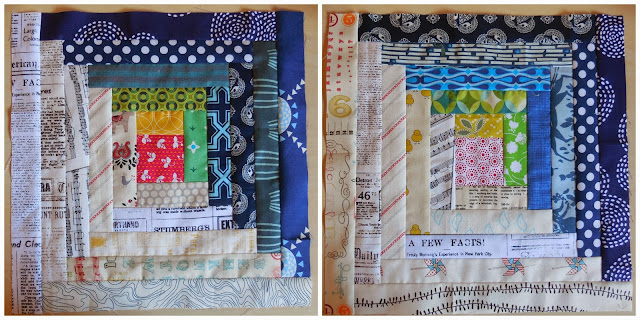 Determined to do better this month, I decided to get on with Emily's blocks for the Modern Stitching Bee. Emily asked for log cabins using a little red, yellow and green surrounded by navy and low volume fabrics. While I didn't repeat within each block, there are some repeats within the second block but I'm hoping that with some careful positioning they will fit in nicely. Another beautiful quilt me thinks.

A couple of bees wind up this month and I won't be joining in any Round 2s. I need to lessen my bee commitments and concentrate on just a couple.  If you hear me joining another you have permission to shout at me!