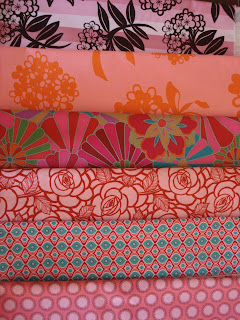 So with the way I was feeling on Wednesday, I was all set to take my best dressmaking scissors to my husband`s collection of checked summer shirts (of which he has many and wears few).  This was not the premeditated actions of a woman scorned but rather my impatience at the length of time it was taking for my fabric to arrive from the US. Actually not an inordinate length of time as these things go - just two weeks but when it`s coming by plane, why does it take even two weeks??

I`ve always been impatient where sewing is concerned  - ask my mother. When I was a teenager, I made a lot of my own clothes  - I thought I was the bee`s knees as I wore my long straight skirts with buttons up the length of the back with a big baggy sweater,  and ankle boots - so eighties.  I would make a skirt in one sitting - no breaks until it was done and late into the night blood curdling screams would fill the air as I realized I`d made some mistake.  It had to be ready to wear the next day to college.

Anyway yesterday, much to my husband`s relief that he would have something to wear this summer, it arrived. Here it is washed and dried and ready to be cut up and sewn back together again.


I have to admit that I have been wondering to myself why I chose these fabrics.  It`s not that I don`t like them. Clearly, I love them but why reds, pinks and oranges?  They are just not colours I am naturally drawn to.  I`m more a blues and greens girl, and so I am thinking that maybe I was subconsciously drawn to them because they are colours that suit the light here in Marrakech.  Unlike the coastal towns in Morocco where all the buildings are painted white, here in Marrakech (which is on a plain at the foothills to the Atlas Mountains) the buildings are painted pink. In my design innocence, the last duvet cover I bought for our bedroom was a pale sage green.  I reckoned that it would cool me down in the summer months here.  I was wrong.  It looks terrible (and doesn`t even cool me down) - just as the reds, pinks and oranges of these fabrics might not suit the light in Scandinavian countries.  So now I`m asking myself  - have I subconsciously bought fabrics for what could be the first Marrakech quilt?

I plan to make a quilt based on the log cabin design of Jane Brocket`s Russian Shawl quilt so this afternoon I`ll be planning it out and will hopefully start cutting tomorrow. I`m going to piece by hand as I just prefer it that way and find it more accurate.  I`ll post some photos next week.

Oh by the way, I changed the name of this blog as it`s not just about quilting and my life has thankfully had a very rich pattern but that`s for a post another day.

I can see why you were drawn to these fabrics! They are so beautiful!! Happy weekend stitching away by hand!

The new blogname is a good one!

Thanks so much Nicolette. I really admire your positive attitude to life! Hope you are taking care of your eyes..have a great weekend.