Sometimes You Just Need a Reminder...

...of home.  While Morocco is clearly my home (it should be after 9 years), I can`t help feeling homesick for the sceptered isle from time to time. I nearly booked a ticket to go back for a week when my mum leaves on Saturday but in the end I didn`t. I made a cushion cover instead and saved the air ticket for a trip back over the holidays in December.

Back in February, when I had only been blogging for a couple of weeks, I made this Union flag block using some lovely Amy Butler Love fabrics. Yes, yes I know.  It`s pink and green.  Quelle surprise!

I straight line quilted it... 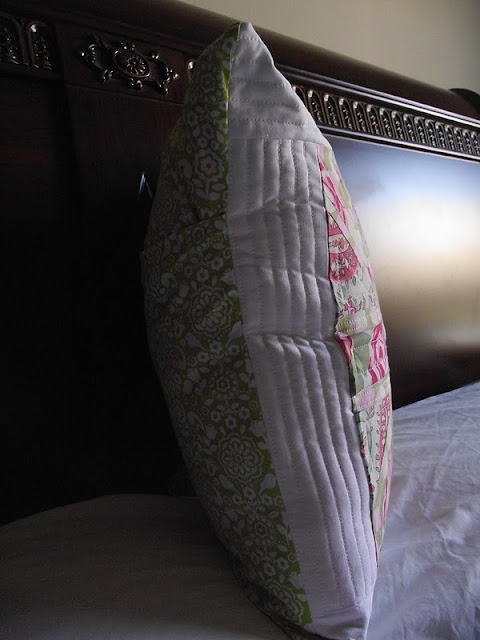 ...and backed it in this zingy green fabric.  It is the twin of this Disappearing 9 Patch cushion.

A couple of Fridays ago, Julie at The Intrepid Thread was having a very silly 20 per cent off everything sale for 24 hours. To feed my fabric addiction, I ordered 11 fat quarters of Heirloom by Joel Dewberry in the sapphire colourway.   Today, the lovelies arrived. 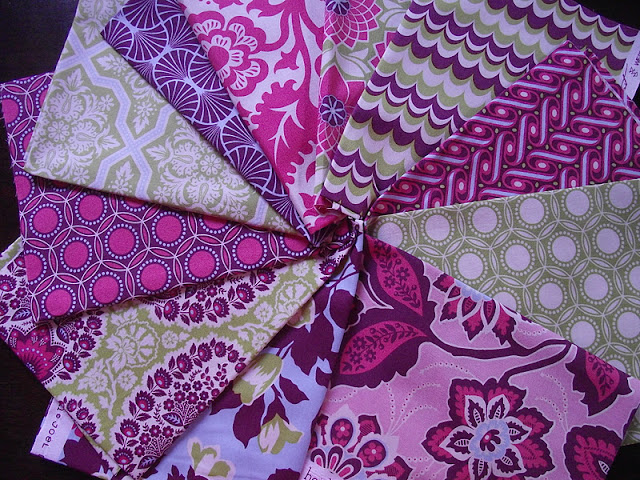 Linking up with Sew Modern Monday - go on, hop on over and have a look at what creative people there are out there. Tsk. As if you didn`t know. 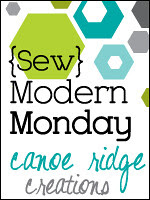 Love the cushion and the new fabric - yummy!

I love that your Union Jack is understated and your disappearing 9 patch has given me an idea..............

Love your cushion. Love the colours you made it in.

Your new cushion is just lovely, I really like the colours.
Your new fabrics are also VERY nice. When you buy fabric do you know what you are going to use it for or do you wait until you have it to decide? Just interested!!!

what a beautiful reminder of your homeland. Pink and green union jack, now that is YOU!

Ooh, that cushion looks fab, and love the new fabrics.

Wow - this is just packed with eye candy! Love the cushion and would follow you anywhere for your scraps after using that fabric :)

I love your cushion and I am starting to love Heirloom to the point where I might have to buy some!!!

I love Union Jack!! I've made a couple pillow covers for myself (hubs wasn't too thrilled at first, he's ex-US military. he got used to it!)

beautiful cushion cover! Love it. I'm sorry you're feeling homesick, I would miss my mommy just terrible (and I frequently still do!) if I didn't live only 45min away. Happy sewing :D

The pillow looks great! And I love those Heirloom prints!

I like the Union Jack cushion. I've been away from the UK for 6 years now. I don't feel homesick, just a little nostalgic sometimes. But I think I must be looking through rose tinted specs, becasue when I go do go back, I can't wait to get away again!
The purples and greens in that Joel Dewberry are wonderful.

That fabric stack is gorgeous! I love the Intrepid Thread too. :)

great cushion cover!!! I'm about to start a union jack, maybe its an olympic thing or patriotic?