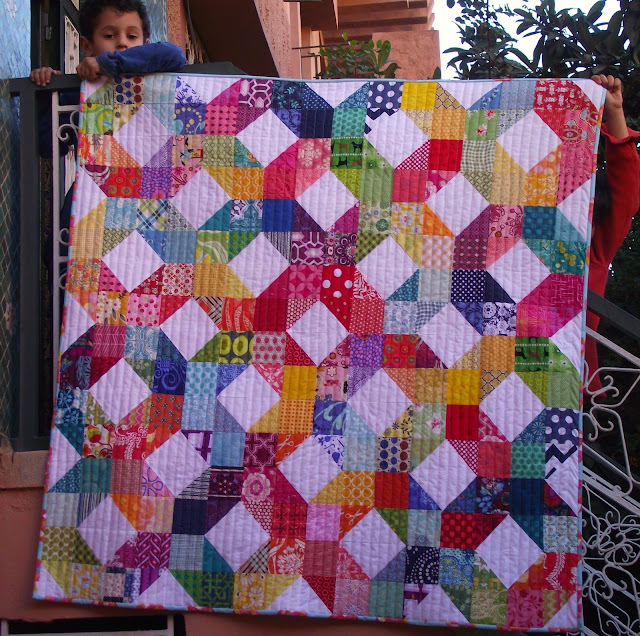 You wouldn't believe the mayhem going on behind this quilt as I was taking photos.   Short of a responsible adult to hold the quilt, I enlisted the help of Zaki (age 4) and his cousin Salma (7 years old).  Behind the quilt, one of Zaki's 'big' cousins was restraining another 'small' cousin from jeopardising the photo shoot.  Light was going and I had to be quick.  Hence the wonky tilt to the quilt!

I have definitely made a big old dent in the UFOs lying around since I joined Leanne's Finishalong 2013. This is my third finish of 2013.

Last October, it was my second turn as quilter in the Care Circle of do.Good Stitches.  I asked the lovely members to make bright scrappy patchwork wheel blocks. The blocks look so pretty when assembled together - there is just the right mix of dark and light in this quilt.

When you look at the quilt sometimes you see hugs... 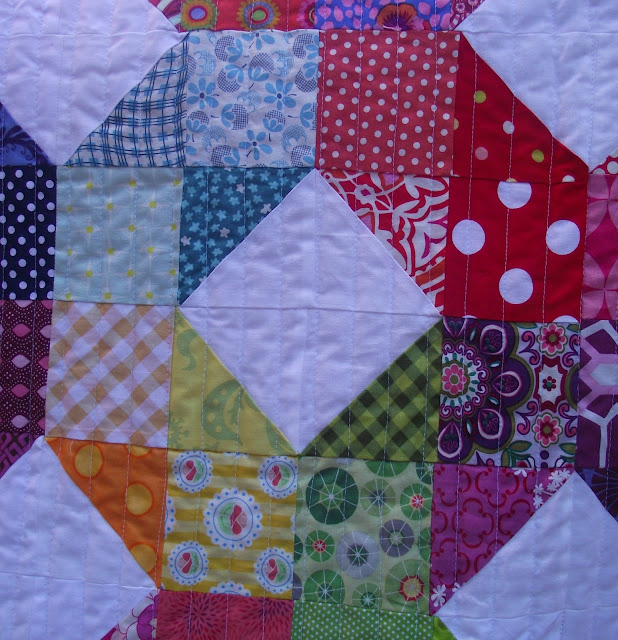 ...and sometimes you see kisses... 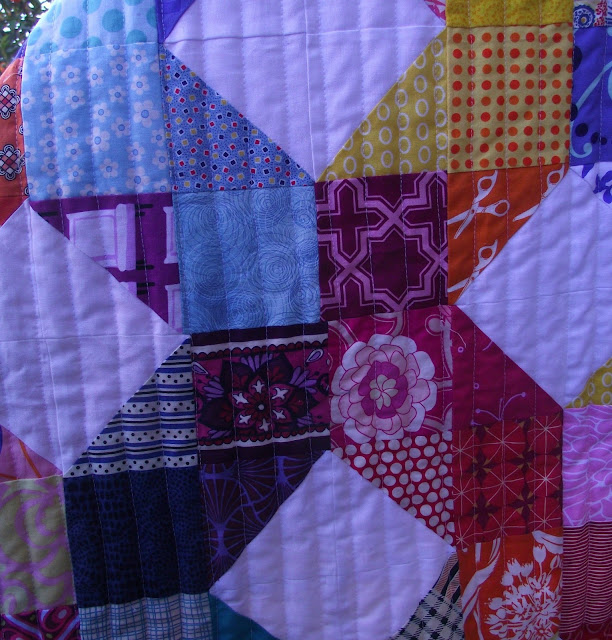 I made a backing using white cotton and some of Tula Pink's Birds & Bees, and used some for the binding too. I bought some half yards last year and never did work out quite how to use them... 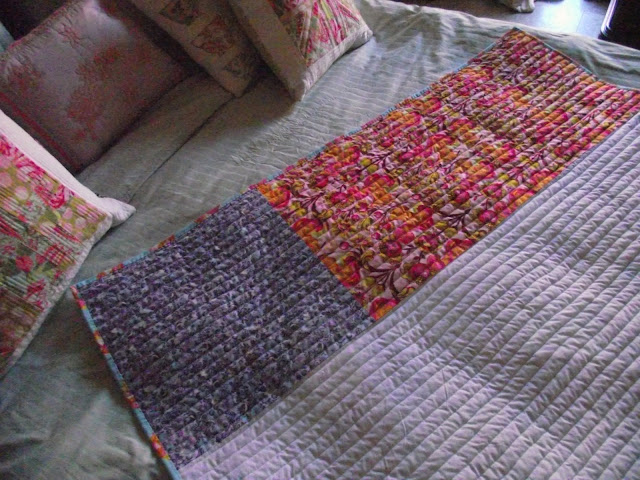 ...especially these squirrels...so it makes me happy to see them off the spare bed and in a quilt. 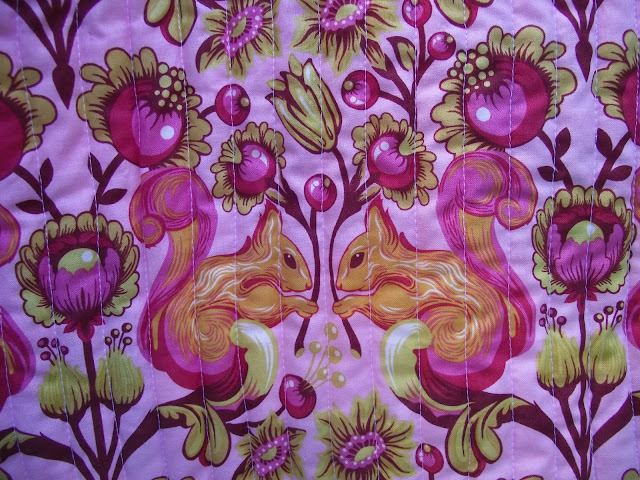 When I returned from England at the beginning of the month, I was uncharacteristically slack when I gathered up my sewing kit and caboodle and left behind fabric (*gasp*) and my hera marker at my mum's.  So I chose simple straight line quilting again and as this is a smallish quilt (48" x 48"), it was done in a flash. 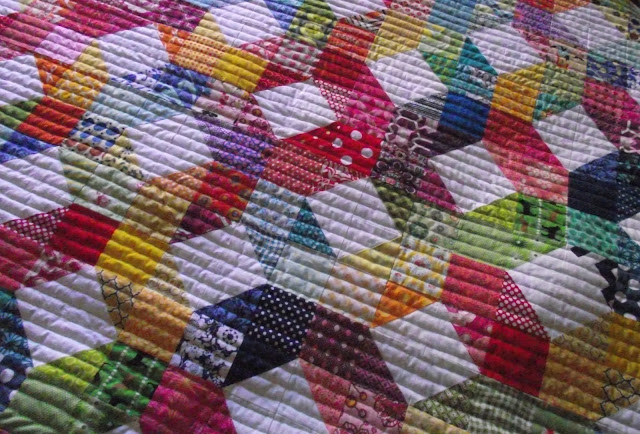 Thank you to all the wonderful women who contributed to this quilt.  I am sure it will give lots of quilty hugs and kisses to a sick child when I hand it over to  Project Linus UK.

Things will be a bit slower on the quilt making front but it has made me realize that if I lived somewhere where I could buy batting or thread at a local quilt store or online and have it in a couple of days then I would probably be much more productive.  I bought 4 kilometers of thread (4 x Gutermann's 1000m spools) back with me along with 3 lots of batting - the batting has gone as has over 1 kilometer of thread but I'm looking forward to finishing bee blocks and working on some quilt tops - after all my favourite part of the process...

Linking up with TGIFF being hosted by Laura this week!

Gorgeous quilt! And having a cute little face in a quilt photo never hurts anything. :)

It is so gorgeous! I love the colors!

Nice to know it's not just me that has to wrestle with littl eones when there are quilt photos to take! Looks fab, well done! : )

Three cheers for the quilt wranglers!
Measuring the quilting in kilometers now are we?

beautiful colours...it will certainly cheer up the recipient!
Love the little helpers!! :)

Great quilt! Not sure what's worse- having recalcitrant helpers or none at all! Lol! Zaki is so sweet though, it wouldn't have him being naughty, would it?!!!!

I love this quilt, just perfect! Love that you measure by Kms, perhaps I better not! Though I am down to 10m of wadding from start of Dec and 27m!

This is beautiful! Beautiful!

It is simply amazing. Wonderful job, Miss A!

Gorgeous - you're on fire with the UFO finishing!

I love this quilt. All that colour blends so well and it just makes me happy looking at it. I hope it does the same to the recipient. Well done you!

Absolutely gorgeous (and the quilt isn't bad too!) I am so with you on the quilt shop, it's just taken nearly 3 weeks for some batting to arrive, it's so frustrating when you want to get on with something. Now I have to start looking for other places to buy with the postage increase in the US.... sigh. Hugs xx

Beautiful quilt - love the little X's and O's in there!

Such a cute photo!

Oh wow it is soooooo lovely!

I totally love this quilt Annabella

Stupid iPad wouldn't let me write anymore.... Great job on getting it finished!! That hug up there, that was from me :)

There was me thinking you ere suggesting your child was ET ;o) Looks fab, and I love those squirrels!

That is one amazing quilt, well done on a beautiful finish.
As for the squirrel fabric, I would give my right arm for a square of that. You canna mind who's make it is can you ?
Polly
xx

Oh I do love this block, esp. when it's scrappy! This quilt has turned out beautifully, and the quilting is perfect! Well done A! Jxo

i love this so much better than the scrappy trip-along. Am I strange?! great job Annabella

What a pretty quilt! Great color!

It is breath-taking Annabella! I love the quilting. I am so sad that my blocks didn't end up at your place, cause I would love to feel like I contributed to this gorgeousness! Well done you!

lol, little minions causing trouble! the quilt looks so awesome, i love the colors and pattern. i'm working on a similar look as we speak, but on a much smaller scale via EPP. Cheers for finishing up WIP's!

Beautiful arrangement! I wouldn't have thought to use straight line quilting -- fabulous effect against the colorful Xs and Os.

This is so gorgeous!

Hurray for another finish, you are doing great. I think you just need to keep up a supply of batting and thread order while there is still some on the shelf so that the shipping time does not slow you down. I really like this block, it is simple and beautiful.

Lovely colours in this quilt. It's going to make someone very happy!

3rd finish and a beautiful one it is. Gosh I wish shipping weren't so expensive, I could send you all sorts of things.

The kids did a fabulous job though! And this is such a stunning quilt, you really can't take a bad photo of it. I'm sure it will be greatly cherished. :)

I just love this quilt - and the quilting is super, I am so into heavy straight line stuff at the moment.

Nat at Made in Home said...

Love the story behind pictures... So much better that it is wonky! And that quilt is gorgeous!

Ooh understandably a lot of comments for this beautiful quilt. Great block and the blocks look so beautifully co-ordinated together. A fantastic gifting quilt!

Hehehe a picture HIDES a thousand tales of naughtiness. I love this quilt so much. I love it's design and colours. I'm so keen to make my own. I understand how difficult isolation is from what you want to buy, but I think Marrakech would be worse than rural South Australia. At least we have shops in our country.

I love this quilt <<<<<< this >>>>>>> much! I'm currently making a Road to Tennessee quilt and it's like a scrappy version of that, which makes it so much better! How can you not love a rainbow, and the fact that there are so many people involved makes it full of love! Congratulations on getting it finished! Next!

Gorgeous! I've just joined a quilting bee for the first time this year, and am very excited to be able to put a quilt together made by many people! I love that you're giving it to a little one!

This quilt would make anyone happy! Great colors.

Lucy | Charm About You said...

WOW that is so beautiful!! Great blocks and I love the quilting, it looks excellent :)

This is so, so beautiful! The colours are jewel-like - gorgeous!

Wow... that is gorgeous!! I love the straight line quilting, too. I've never done it so closely together and it looks fabulous. Must try! :o)

What a stunning quilt! I love the colors its absolutely gorgeous!!

Coming in from Leanne's FAL Q1 post--terrific quilt and love the story about the stuff going on behind the scenes. In spite of all that, it looks fabulous. Really great job on everything!