Oops I did it Again..

...I played with your heart.
Got lost in the game.
Sorry, I`m not a closet Britney fan but I did it again. I managed to turn a planned more muted block into a block with pink and green fabric in it.  Gah!!

Perhaps it was Jane Brocket leaving a lovely comment on this post about a quilt inspired by her book  The Gentle Art of Quilt-Making but yesterday I felt like I could do anything and felt like doing something different.  So I dug out the pattern for the Camelot quilt by Trish Harper - 16 different circular blocks, which I first saw on Nicolette`s blog. Nicolette is talented beyond words and as modest about her ability and lovely to boot.  If you have never seen Nicolette`s work, pop over and say `hi`.  You won`t regret it. My quilts until now have usually been made with square or rectangular pieces.  Not very challenging piecing wise but remember that yesterday I felt like quilting superwoman. So I dug out my Terrain FQs and got cutting. 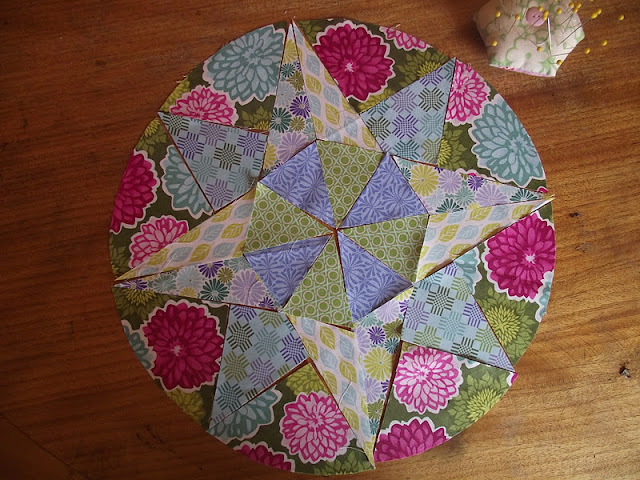 You know disaster will strike soon when it`s going really well and you start composing your blog post in your head and then cue the needle scratching the record sound.  The instructions for the pattern are brief.  They assume a prior knowledge of piecing and that`s okay because I kind of have that and they don`t explain how to cast on when you buy a knitting pattern.  I pieced the star using my machine not appreciating that this is intended to be a hand quilting project...and this is why. 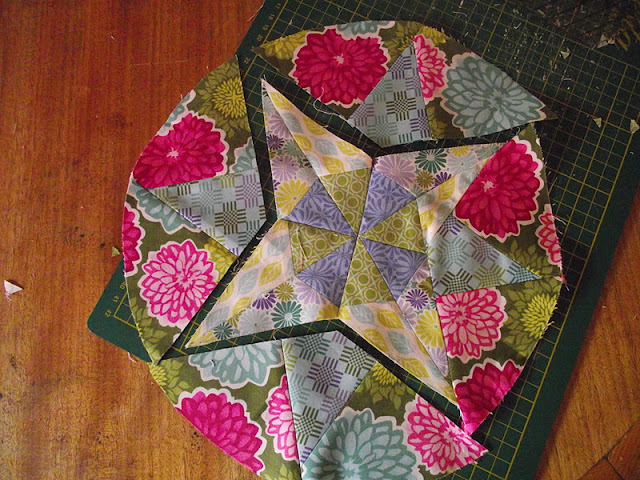 I had no idea how to attach these four segments to the star without the point puckering.  I machine pieced it to begin with and you`ll see that the result was unimpressive to say the least.  I looked on youtube - nothing, the flikr group The Camelot Quilters had a little advice but not much and in the end I emailed Nicolette and she was super helpful. Thanks so much Nicolette.

As it turns out, this is a practice block.  I don`t like the large floral in this piece at all - it was a total mistake which is just as well as I have learned that the pattern doesn`t include a seam allowance (?!). A lot of the blocks have this V segment in them so I shall have to get practicing if I`m going to attempt to make this quilt...perhaps next time not using one of my favourite lines of fabric. 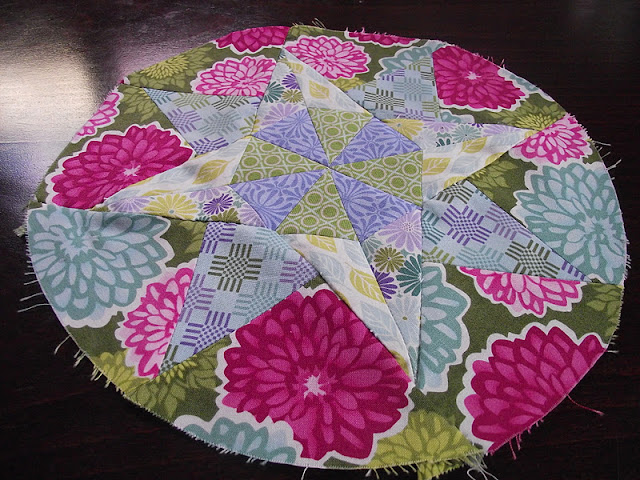 Thanks for all the comments about the Red City quilt top.  In the end, I gave my mum the final word and she said emphatically, `Change It!`, so I did. I used Hadley`s great advice of separating the top two rows, which was genius as unbeknown to her, it was my weakest seam pointwise.  I flipped the top two rows round and it looks better I think. 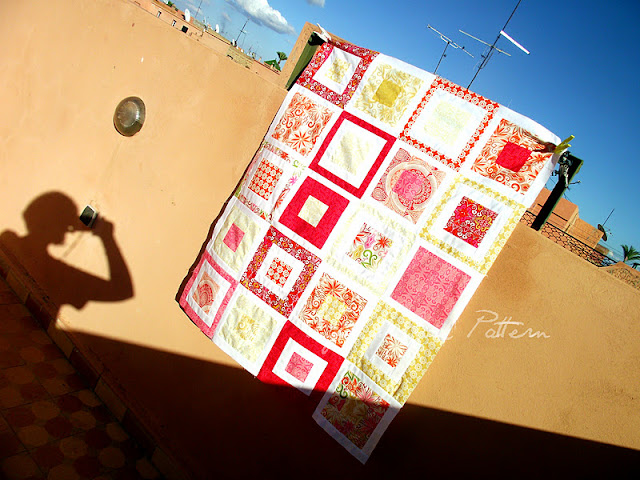 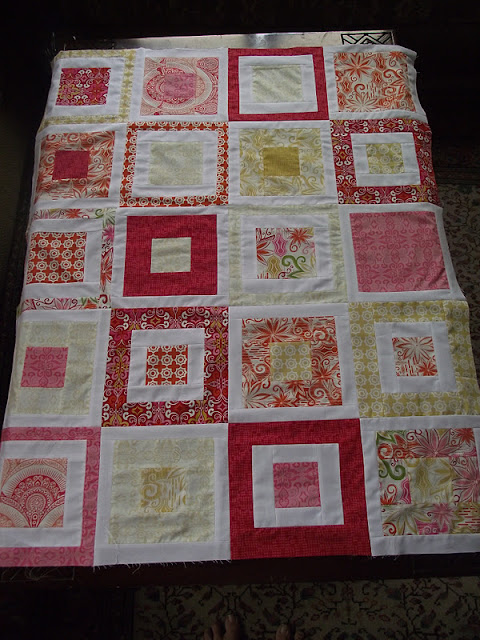 I have three reject blocks (cut a fraction too small) so I think I`m going to leave it borderless and try and come up with a back so that I can, as Rhonda says,get that baby basted. So that`s it from this corner of the world.  Not much `occurring` (written in a Ruth voice) but I have so much to do, I just have to focus. If you don`t know Ruth, here she is singing a bit of Dolly.

hadley was correct, and the quilt looks fantastic! I love Gavin and Stacey, it was good to watch that clip again

Oh yes, that looks great turned round (I had to do that with my ATS QAL too)

Super impressed with the idea of round blocks, WTG for even tackling it! Not having a seam allowance is not the end of the world BTW, it just means your block will be a bit smaller :o)

Yay for ... me!
It does look great now, and I don't take any credit for that!
Shame about the big angles - but you sound sorted. As for the rogue block, quilt it, bind it and put a vase on it!

Love the quilt - it looks much more balanced now! Good luck with your next Camelot block, hand piecing it will be much easier than machine piecing, honest!! Could you unpick the floral segments and piece something else in its place? Seems a pity to waste such a pretty centre...

It looks so pretty Annabella. I love it.

I go away for a few days and its all happening here! Feel like I missed weeks, not days. But the quilt top is gorgeous and I think that the circle block is great, but you are right, the large floral is a bit over powering. Could you not sew quite so much next time I go away - or maybe I should just come to Marakech!

I like the switch of the rows on the quilt. Looks good. I like the circle pattern, I', going to have to give that a go.
di xo

I have drooled over those Camelot blocks and I reckon you made a good stab at it - not sure I have the staying power for it,
Well done on changing the quilt round.

The quilt is beautiful, even more lovely now! I have that Camelot pattern but have not had time to start it. You have made me think about it again.

Thanks so much for the introduction to Jane Brocket and The Gentle Art of Quiltmaking. I bought the book and it's easily my favorite quilt book (and I have a handsome library!). Your interpretation of the Russian Shawl quilt was spot on!

it's usually those last bits that are complicated or not as easy as we think. like putting together crochet pieces - i never really found a way i liked.

(btw, you can use ground spices or grind them yourself for the chutney)

I really like the result of the alteration in your red quilt. I also completely loved your camelot circle with the fabrics you picked. I might be biassed because i am totaly in love with the Terrain collection. I went oh when you said you didnt like the combination. I like loud, proud and unuasual in colourcombinations.

Ohh I’m so behind in reading posts! Thanks for your kind words Annabella, your camelot circle block looks wonderful!
Love your red City quilt!

Your circle is beautiful even if you don't like it. I want to try this pattern some day but the idea of hand piecing is just overwhelming to me right now. Usually hand piecing templates don't include a seam allowance -- you're supposed to trace around them and then use the tracing line as your stitching line. You just eyeball the seam allowance when you cut out your pieces. :)