Fake it `til You Make It

That expression will be written on my tombstone no doubt.  Throughout life I`ve often found myself in situations where I`ve had to convince others that I know far more about something than I actually do!

As I`ve mentioned before, a couple of weeks ago I signed up for the Mouthy Stitches swap hosted by the lovelies, Susan, Hadley and Cindy.  It`s a zippered pouch swap.  Suffering from FOMO (Fear of Missing Out), I immediately signed up after receiving an early alarm call from Hadley to do so.  Bleary eyed, I headed over to `hers` and the rest is as they say, history. 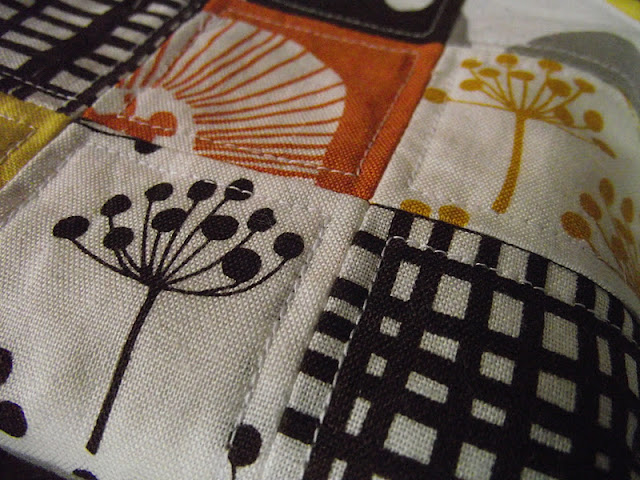 The slight fly in the ointment was that I had never actually made a zippered pouch before.  I had put numerous zips in clothes (in my teens) but a pouch of the zippered variety was new territory. 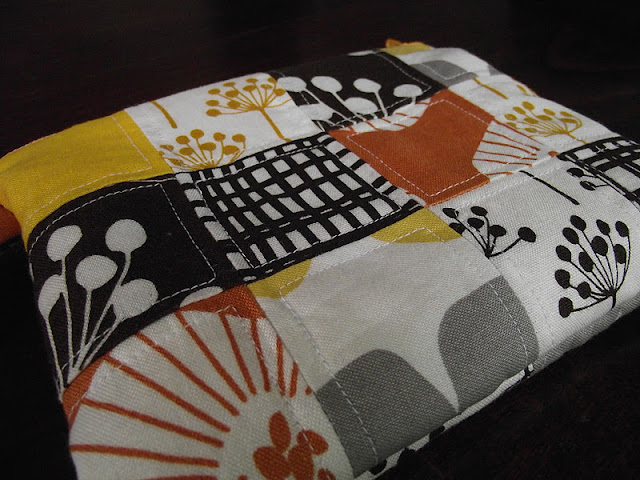 Until today, that is.  I made what will be doubtless one of many practice pouches in the warm colourway of Lotta Jansdotter`s Echo. Not perfect by any means but it`s a pouch (well a wristlet to be exact) and there is a zip in it. Once I decide on a zip colour for my swap partner`s pouch, I need to get some coordinating thread - I don`t like the effect of the white thread on the yellow zip. 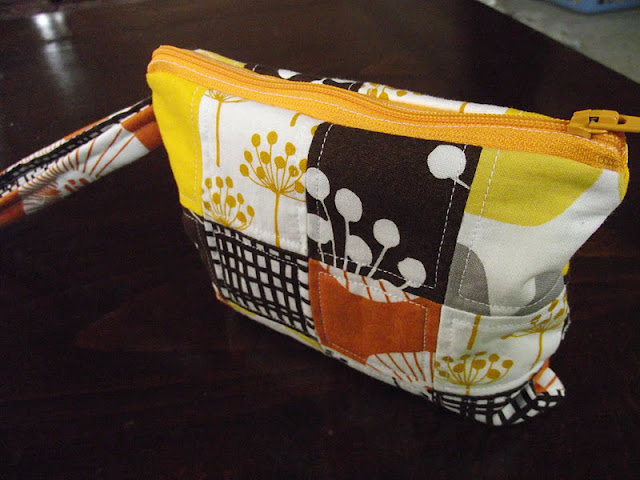 As I was making the patchwork panels (the front and back are mirror images of each other), it dawned on me how much brown was in the warm tones of the Echo prints, and I recalled a flikr discussion about how many people hated brown!  I wouldn`t necessarily want a brown quilt but I`ve always quite liked brown accessories.

The wristlet is quite capacious and holds all the essentials and will be handy for running to the shops or gym (ah, yes, I remember the gym...vaguely). 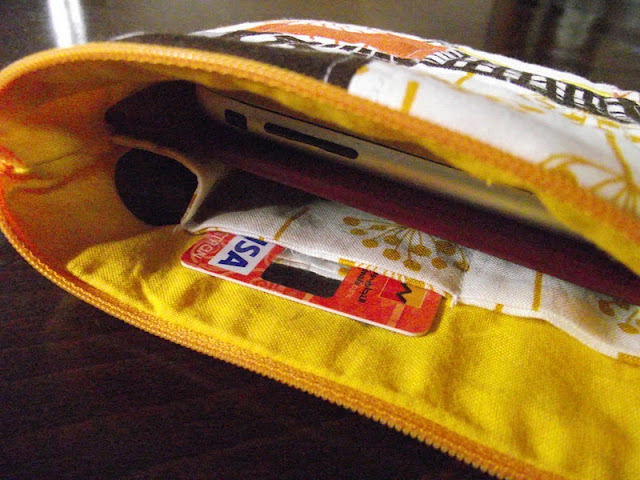 I used Ayumi`s tutorial here.  If I was to say it was plain sailing, then I would be lying.  The seam ripper did come out once or twice but it wasn`t so bad. Nothing to do with the instructions, which are excellent but my incompetence in following them. Now I need to try a pouch with covered end tabs.

There is awesome talent in this swap.  I have been assigned my partner and I know her to be super sweet.  I`m just hoping she is of a forgiving nature.  Just in case.

In the last week, I was overwhelmed to be asked to participate in a couple of really exciting things coming up soon.  They are a little hush hush at the moment but as soon as I receive the nod, you`ll be the first to know.  It`s also my blogaversary in a couple of days, so be sure to come back.  Just saying.

boy this looks fantastic in Echo!! I have only made pouches with the tabbed ends, so I am happy to try this tute w/o - thanks.

Ooh love it! I did a zipper pouch tutorial for Jenna at Sew Happy Geek which is in her tutorials tab if you want to check it out (it has tab ends)

Love that you used Echo on this. So cute and mod!

I think it looks great! Definitely impressive, especially for your first try! Way to go!

That pouch is amazing you loon!!!

Still catching up on my blog reading. Just thought I would tell you (a) that I love the wristlet, and (b) how to avoid the thread on the zipper thing.
Sew your outside fabric and lining to the zipper at the same time. Layer them up, first your lining facing up, then the zipper facing up, zip closed and the zip end to the right. Outer fabric facing down onto the zip. Pin and sew two thirds the way, reach under and move the zip to the side already sewn. Press both fabrics away from the zip and do a top stitch close to the edge to tidy it up.

Repeat the process, but the zip half open, right side up. And the top fabric facing up this time. (God, I hope I have this in the right order!) Flip the fabric when it is in place to make sure it works! And then email me for further instructions!! You end up with no stitching on the zipper. It was Kat't tutorial that she now sells. Look at the other tutorials to see if they have photos showing this. Ayumi's tutorial is fab, except for this point.

Don't be so hard on yourself, it looks fantastic to me and if it were winging my way, I would be thrilled. Also, I don't think you would class anything as browns in your pouch: I mean, I know I can see brown but you have all those other lovely colours, and also, that is a nice brown, not sludge. I took my exams today, so can now properly concentrate on my partner and what to make!

Looks great and ditto what Susan said about the zipper assembly process.

I forgot to say I love, love, love the piecing with Echo!

Loving this pouch, if you have e don't worry about any more practice pouches! Is this Echo a linen mix, it looks very textured....and yummy.

yes susan is just right with the instruction thats how i do it and it works !!!!!
still struggling with the tabs though:))

Great pouch, Annabella! Would never have guessed it was your first!

It looks fantastic, and you can send it my way, thank you!

What a great thing to make - very useful and pretty. I think you did a good job with it and I really like the colours.

Well if they do not want it, you can send it to me. I'm in love! perfect size! and I quite like the brown in fabrics in moderation.

GORGEOUS! i'm a big fan of Echo and you've really really shown them off here...fab! And thanks for stopping by to say hello on my blog today too ;-)

i have no experience with zippers myself, but i love the look of this pouch. i think brown is good in accessories and small doses for most people, even if they don't like brown as a dominant quilt color. nice job, and way to go out of your comfort zone!

It's wonderful! I love those little squares of Echo, I want to make one like that for me. I too remember the gym but vaguely. Maybe tomorrow I will make a plan.

its gorgeous annabella - and I love the fabric choice :)

I love this pouch and poo on those who don't like brown. They are the ones that started the whole brown thing anyway **wink wink**

Just read Hadley's comment...she is just afraid I will mail her an ugly 70's brown pouch...which is still possible!!!