She once was a lazy pinner...

...sounds like the beginning of a limerick doesn`t it?  I had big plans to get lots done today but the cold which was coming on yesterday made a full blown appearance and with family arriving this afternoon I just couldn`t do what I wanted to do.
I needed a small project so I spent an hour or so this morning looking for a block for the 4x5 Modern Quilt Bee.  I have had a pinterest account for quite a while now but it has lain mostly redundant a) because I didn`t really `get` it and b) because I kept reading how addictive it was and early signs are that this is the case.  Be careful, I may pin you!!
I wanted to step out of my comfort zone and try something I wouldn`t normally do and plumped for HSTs.  The one that finally got my vote was this Blockade Block by Faith (she of The Summer Sampler Series) at Fresh Lemons.  So called because it symbolized the Union`s strategy to surround the confederacy..apparently.  I love Faith`s quilts and if you don`t know her blog it`s full of free patterns and tutorials, including one for how to piece a Y seam, which is just what I need for my Camelot blocks, which are full to bursting with Y seams!  Anyway, I love how Faith took a traditional block and made it look so contemporary. 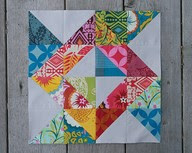 Here`s a Blockade block made by Becky Brown after the Civil War. 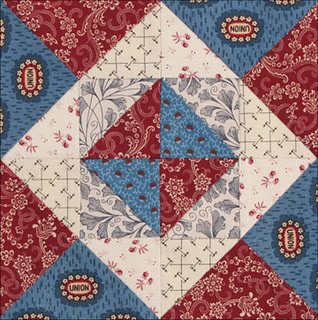 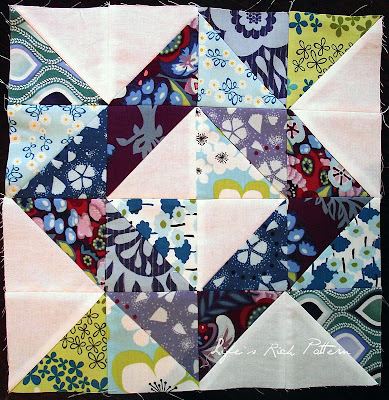 It`s a 12 inch block. I looked to Leila`s  Skill Builder Sampler QAL for how to measure HSTs so that you don`t chop your points off when you come to join your blocks - a mistake I made earlier this year when I was making a block for Ayumi`s Tokyo Quilt Festival quilts.

I admit to being ever so slightly pleased with my points.  They used to be baaaad. One of the best things I came away with from the Across the Seas QAL (apart from my quilt) was Sarah`s tip to pin, pin and pin again and sew over your pins.  I was always a lazy pinner but since I took on board Sarah`s advice, my points while not perfect have improved and I haven`t broken a needle yet.

By blogging we learn so much from each other.  I hope one day that I`ll be giving advice rather than just taking it! What`s your tip of the day?

So I`ll stick this audition block up on flikr and hope the rest of the hive like it.  If they do, I`ll be making 5 blocks each in their colours. 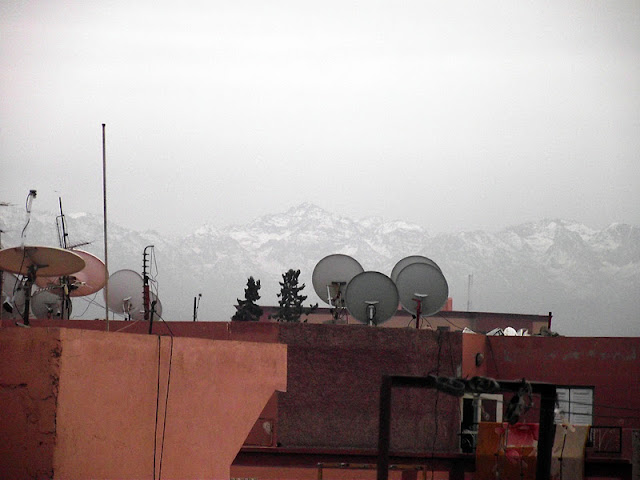 Lastly, here`s a photo I took from our roof terrace today - not very 1001 Peeps is it??  Over the satellite dishes - typical of the Marrakech skyline, are the Atlas Mountains with snow-capped peaks. The recent rain we have had has turned to snow and that`s the reason why our evenings are so c c c cold!
Posted by Annabella at 18:59

Wow, what a fabulous photo, such a contrast! Your block looks great! Hmmm...a tip...oh, I know, use starch (particularly if, like me, you wash your fabric before you use it) - it makes a huge difference!

Great post - I saved a pic of your block for future use & bookmarked the HST tips - thanks. Very interesting photo too - kind of sad but beautiful too!

Your picture looks great - you really can't beat a snow capped mountain can you?
I'm no expert but your blocks look really good. I love your taste in fabric.

I love it! You did a great job! I will go check out that tip about points. I could use a little help in that area sometimes!
My tip of the day is if you are doing iron-on appliques, be sure to arrange your block with it ON the ironing board. Or else you will have to move it over and risk upseting your design.
Ask me how I know that!

I love your block, the view is amazing - no pointers today, I have been hammering press-studs!

Your block is brill - great points!
Love those Peeps in blue - my top is almost done, hope to get a pic over the weekend if I stop sneezing and sniffing long enough!

Love the block, well done! That snow does look a little chilly though, you're right...

Beautiful block and mountains! Your block looks strikingly modern considering the design originated during the Civil War era (Interesting backstory too! Who would of thought?). I suppose many blocks we sew today came from this time period as well. Thanks for sharing and for getting me thinking! Now I need to do some research!

Love your block & am happy I will be one of the lucky recipients! ;-)

Great block and cool photo. Love that you have such a good view of the mountains - even with all those satellite dishes.

Love that block and you know I got to the end and suddenly realised it was me you were talking about!!! So feeling very chuffed that I could help :-)

ok, starting from the bottom and working my way up...I did not know it snows there! Your weather is really very much like ours...we have snow in the mountains too, and cold nights and rain today.
The peeps quilt is coming along beautifully.
Civil War block...who knew it could be so lovely and those points are perfect!
Now feel better and do not get full blown sick!
Hugs for a speedy recovery!

and there was I thinking it was always hot and sunny in Marrakech! Love your block!!

Wow. Very cool to see the same block in so many combinations. I love that sort of thing.

I am a pinaholic...I learned very early in my textile career that it just wasn't worth the pain of not pinning it the first time. And yes, I too sew over them! I am loving the Civil War block, very cool. It is a little passion of mine to take a very old design and revamp it with something modern (or a modern pattern with reproduction prints too!). But I was an art history major so I guess I'm a dork like that! I am curious about the HST issue you spoke of...hmmm...have to check out Leila's tute to see what you mean. Thanks for sharing Annabella! Hope you are feeling better.

I love your civil war block, looks fabulous in the fabrics you chose. Will try the tip of pinning - always great to find out tips for perfect points!

What a lovely block, I had no idea that there was something like Civil War Blocks. It is true that through bloggers we learn every kind of stuff!

I love your block! :o) Thanks for coming by to visit my blog. I am your new follower. Come back by and visit anytime. The mountains are beautiful.
xo
Kelli

Your bee block looks great! I used to not pin, too, and then finally learned that it's really helpful. :D Who knew!

Those mountains are so pretty. Love the HST block. Your points are very well done. I need to learn how to my my blocks better when using HSTs.
~Kimberlee

firstly lets get things sorted - YOU are not a lazy pinner - that is me you are speaking of :)
and

ccccold is correct - that makes my fingers cold typing and seeing that snow - but I suppose you are used to it.

hope you are all well x

Have a wonderful day,